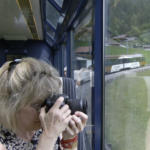 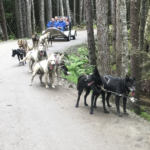 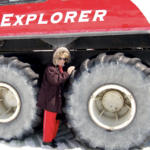 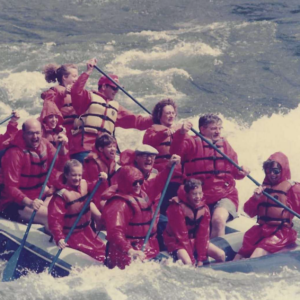 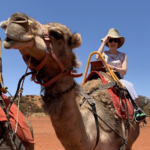 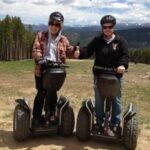 You ask: What does travel have to do with the writing life?

My best stories begin on the road.

I met my husband at a state broadcast convention. Competitors in radio news, we created our first story. Later we married, left broadcasting and started a communications business.

Travel became a client, sometimes to places with an alluring uniqueness.  So often, exploration revealed hidden gifts that would halt me into silence. The gagging burn of sulphur or the tap-tap-tap of a kangaroo’s foot would lead to a single whisper in my ear. Always, it was a stern “This!”  The verbal cue translated into “stop, look and listen.” Child-like once more, I obeyed.

Our first five years in business, we overnighted in half of America’s states. We expanded our travel Bucket List.

Two decades later, our world map held 75 overnight pins: 50 U.S. states, Puerto Rico, and 24 countries. An unexpected bonus? Three continents. We documented it all in photograph and video, capturing the glorious, the unusual, and even the so-so. I craved what no one else could see.

Amid the pandemic, we plan our future journeys. Four continents remain. Africa and Antarctica bicker for First Trip.

I’m ready for travel. I miss the word.

Below, enter a portal revealing six adventures that offered both the unexpected and a new perspective.

Photos and stories will rotate in the months ahead. Another 69 stories await sharing with more to follow as safe travel returns.

{Please click on the thumbnails below to view the short stories} 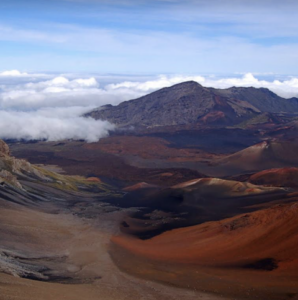 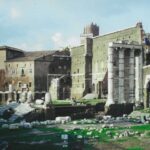 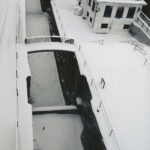 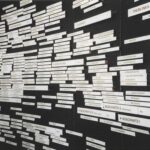 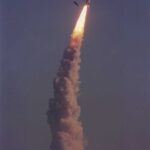 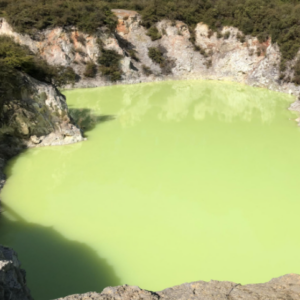 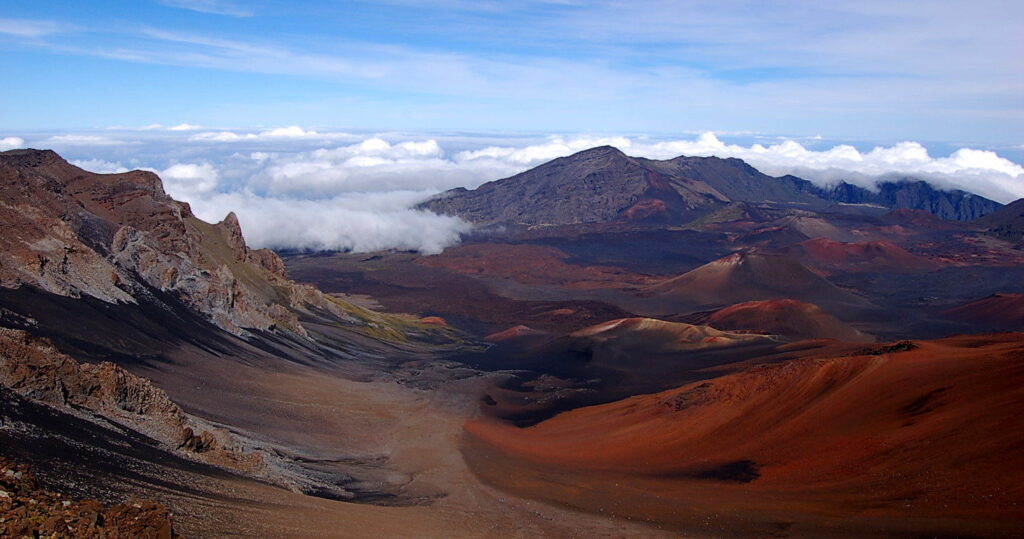 When you think you’ve seen it all, come stand here.

Did I venture onto a spaceship and land here in my dreams? Mars perhaps? I pinch my arm to remind me it’s Maui where I stand. Haleakala Crater lies dormant in the Hawaiian Islands. “Otherworldly” cannot capture the sensory overload that awaits upon stepping onto this soil. It begins with breathing. Oxygen at 8,800 feet enters your lungs too thin, burning with every breath. Multiply the thin air with gusty winds that cut through your mid-section like an ice pick. Your lungs gain brief distraction with the unexpected visual feast. Laid out before you, a living Poussin landscape redoubles the overwhelm. Dare I say it’s too much for eyeballs? While your lungs ache, your eyes tear up. At least NASA got generous usage out of this landscape. Moon rovers once bumped over these hills. Hollywood, no doubt, shot scenes here, too. It’s easy to overlook what lies beneath your feet. One of the world’s largest shield volcanoes, Haleakala Crater comprises more than 75 percent of the island of Maui. Thus, a massive volcano becomes both an island for people, astronauts and actors while maintaining its stance as a piece of heaven on earth. When you visit, wear layers topped with a parka, mittens, and wool scarf. Remember to breathe, too, amid the challenges offered by this breathtaking, chilly view. 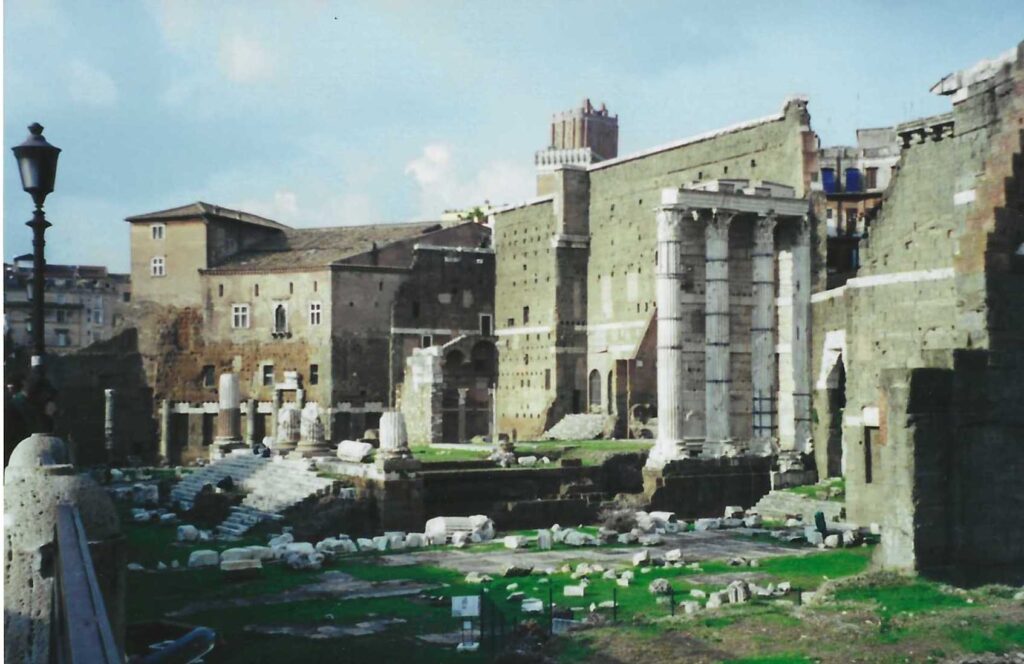 Where old and new collide, what do you honor?

I turn the corner and gasp. A dozen feet below street level – where two of Rome’s busiest thoroughfares intersect – lies what could have been Caesar’s playground. Marble columns abut temple remnants. Tiles of terracotta litter in between. These ancient monuments rest ignored amid little apparent effort to tidy these bits of Italian antiquity. Yet, both above and below this landscape, more layers of history lie buried like castoffs across both the city and the Roman countryside. From 400 AD onward, Rome’s richest fled to country mansions, leaving the central city to fall into disrepair and overgrowth. Generations across centuries built over historic monuments that no one today has ever seen (think Circus Domitianus – the famous race arena). Meanwhile, cars, trucks, city buses, and pedestrians whiz by at today’s street level, each passerby scattering bits of newly-laid asphalt atop current roads. So another layer begins and the present tops the past, both buried under another century of wisdom lost. We hurry now, we hurried then. When will we slow down and appreciate history? 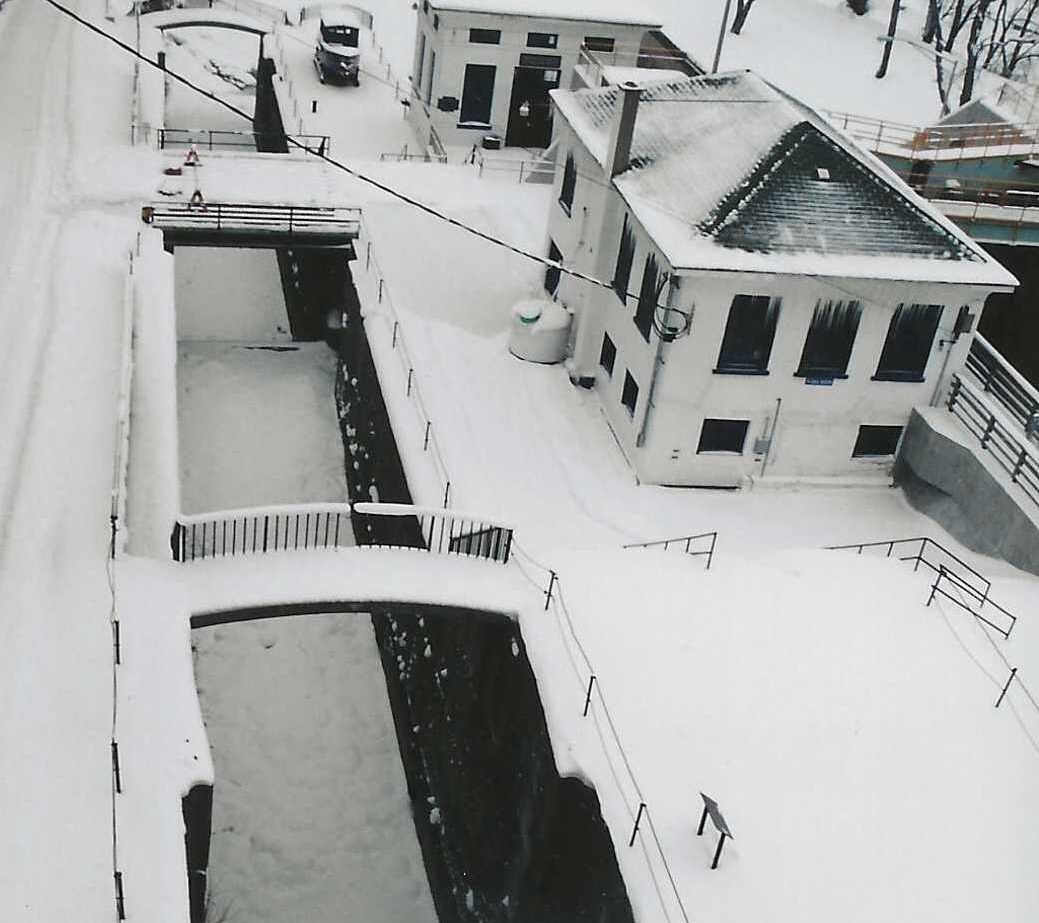 Where has all the water gone, long time passing?

His planned “quick stop along the Erie Canal” failed to grab my interest. My tastebuds craved not snow ice cream in Buffalo, New York, but a snifter of ice wine awaiting at Niagara-on-the-Lake, Canada. We pulled into a museum’s parking lot and discovered the wonderland that is February-at-the-Canal. My earlier preference vanished in the harsh geometry surrounding us. Walkways, buildings, and bridges offered an odd mix of rectangles and squares, all buried together in a frozen landscape. Somehow the separate buildings, comprised of so many independent lines, looked together but apart, all and each stark underneath winter’s bitter blanket. History’s old and forgotten spirits seemed to rise up in silent unison. No Irish immigrants at today’s Erie Canal but deep in my familial past, there’s a passel of kin that may have wandered through on their way southward. Did any of my family lift a shovel here? Seeming dead and buried on this day — unused for the season — the Erie Canal, in warmer months, busies more for giddy tourists than commercial traffic. I wonder why we minimized what once was so valuable. Some canal sections are bridged over and used for public parks, no longer a waterway. Other sections stay busy but not like its groundbreaking days two centuries ago. It took an inmate at a debtor’s prison to conjure up the Erie Canal in 1807. Where’s our Jesse Hawley for today, someone who could revive this place for new use or inspire similar grand projects, Earth-bound preferred? 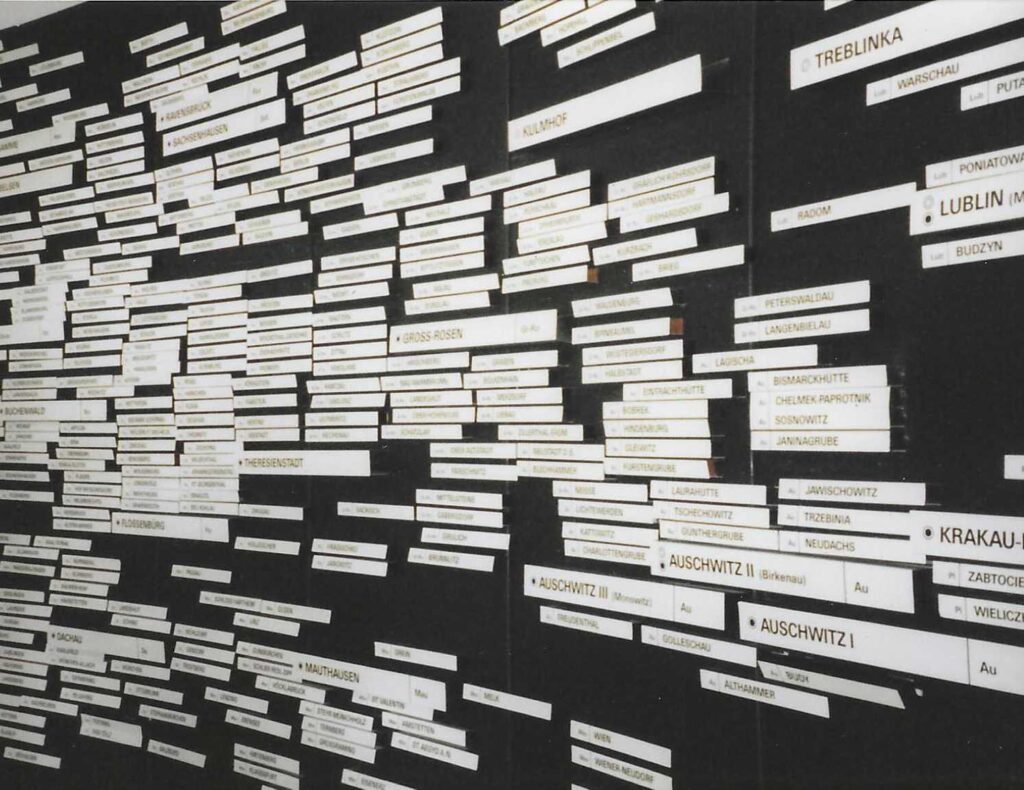 When is it okay not to know?

Inside Dachau’s administration building, my glance swings to a wide black board cluttered with tiny white panels. File folder labels, I think. Walking closer, I read Auschwitz. Mauthausen. I recognize the names from history class and my father-in-law’s World War II experience. As I scan other white panels, my eyes sting with salty tears. Five hundred names of Nazi concentration camps fill this wall. In the next room, I learn the Germans built another 43,500 camps with Dachau the model for many that followed. I choke back tears in discovering that seven kinds of camps existed: internment, extermination, labor, transit, POW, and reception. Before visiting Dachau, I knew of maybe a dozen concentration camps. Every time I see this picture, I remember the scope. My eyes flood and burn, again. 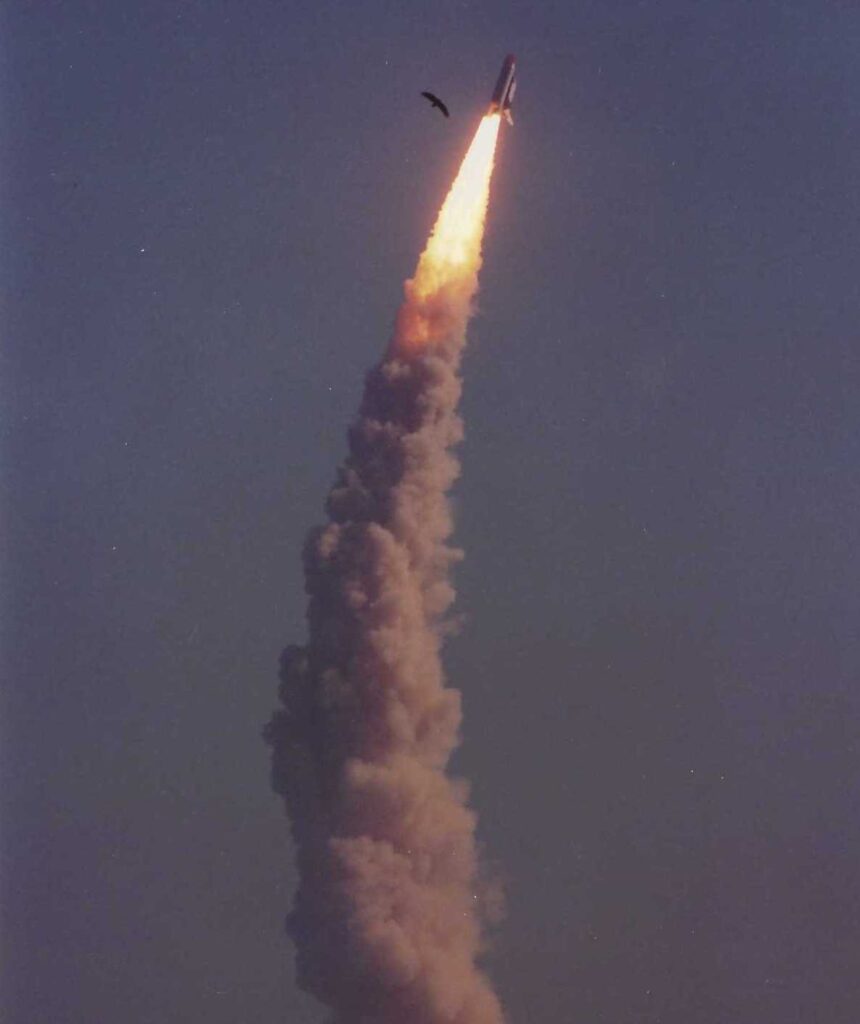 How to soar with rockets…and little black birds.

We reporters sit three miles from the launchpad at Florida’s Kennedy Space Center. We’re the closest non-NASA people to the space shuttle Columbia. Massive rockets beneath the space orbiter fire up, orange-yellow flames ejecting full circle around the launch base. I cross all ten fingers as my mind flashes back to the day Challenger exploded on my duty editor’s watch. I shake my head to focus instead on the NASA announcer’s methodical “3-2-1” countdown. I wrap both arms tight around my midsection. Raising both eyes, I watch the gush of flames and pillows of smoke billowing out ever further around the launchpad. Slowly, Columbia rises off the launchpad. Steady and easy, she glides. Another day at the space office? Further and further the rocket heads heavenward. I never move my gaze from the flames. After long seconds of flame watching, I notice the eerie. It’s dead silent. How can this be? I’d forgotten: sound travels slowly (1100 feet/second) which delays my hearing of what I’m seeing. Fourteen l.o.n.g. seconds pass before the rockets’ roar thunders into the media area. When it does hit your eardrum, collisions reign. Eardrums vibrate, teeth chatter, eyes tear up. Then the winds blast. Hair lays flat against the skull. Shirt billows in and out like lungs in reverse. Even forearm hair dances in the shuttle winds. Will muscle and bone crack next? It’s a full body blast, approaching orgasmic, before the earth rolls beneath both feet, teasing toes to grip terra firma. The final salute comes as the gusts, roars, and rumbles merge into one massive crescendo, delivering a unified and final gut punch. Somehow I hear the announcer’s most critical words, “Go at throttle up.” I return to hard focus. Unlike Challenger, this shuttle maintains her flight path. Ninety seconds later, we hit the nine minute mark and this crew is safely in outer space. Giddiness blooms. Everyone is alive. Later, I fly home, get my film developed, and see the black bird that followed the shuttle. It appears so close but that’s an illusion. Anything near those powerful rockets incinerates in less than a second. Maybe the bird was a metaphor for me that day? 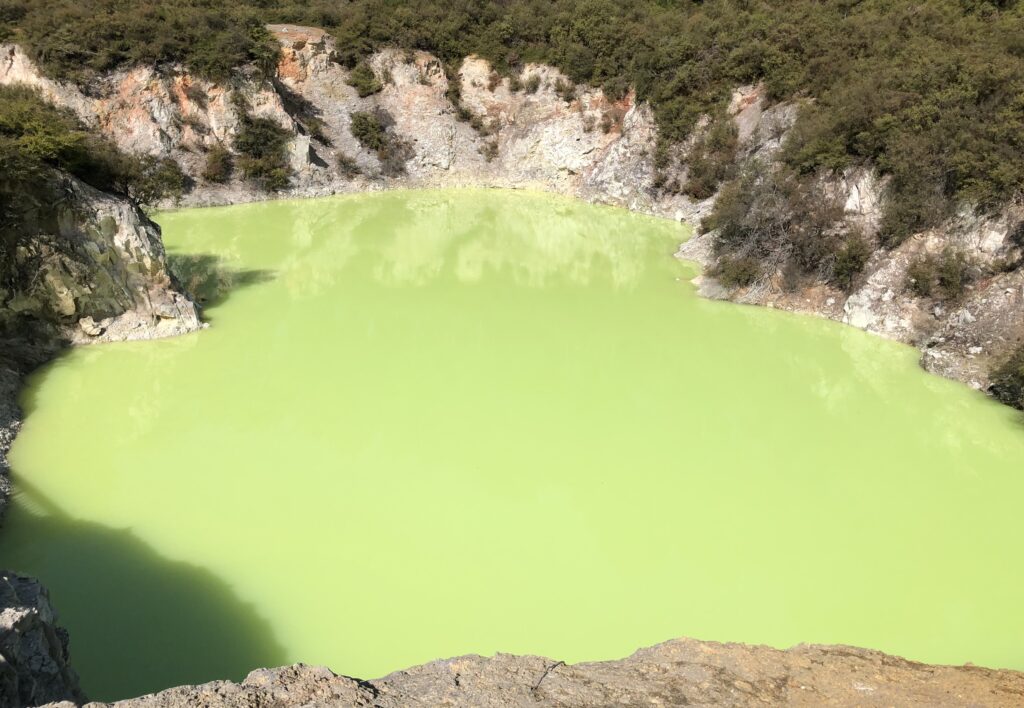 If Maui delivers heaven on earth, then Waiotapu in New Zealand offers its opposite. “Hell on earth,” some islanders call it, for the geothermal waters that dot this landscape. Upon first sight of “Devil’s Bath,” I cry out, “Broccoli soup!” A quick laugh from tour mates leads to our guide’s stern warning – a single touch of this pond could boil away a toe or a finger. Blame mud that’s comprised of sulphur rising up from deep in the earth. Beneath the entire Waiotapu waters is an extreme heat permeating every crater and crevice throughout the Taupo Volcanic Zone. But Devil’s Bath is one of the few pools, ponds, and lakes that doesn’t boil, bubble, gurgle, or otherwise warn you. Walk along the other wooden footpaths to spot pops and spurts of yellow, orange, blue, and red. Smell your way, too. Sulphur dominates but there’s arsenic, antimony, and salts, too. Amid the vivid colors and smells, remember this: cool and calm can fool. Perhaps the same warning applies to other places and people on our planet?